The Bolt Airgun asterisk survey was completed early in the morning, c. 0600 hours. We call this survey an asterisk because of the orientation of the profiles on a map (see below). Airguns produce low frequency sound signals (c. 5 – 200 Hz) which penetrate deep beneath the seabed (c. 2 km depth). In geophysics when doing seismic reflection surveying there is a trade-off between penetration and resolution of the sound sources. The lower the frequency, the deeper the penetration, but the lower the resolution. Airguns are our strongest sound source, but lowest resolution. The aim of the airgun “asterisk” survey was to create sound energy that would be recorded by the Ocean Bottom Seismometers sitting on the seabed (see previous blog entries).
However, it was decided in the morning meeting to temporarily abandon the Airgun survey and get our highest resolution data collection going while weather was good (hopefully for next 72 hours) using a “Squid” surface sparker. The frequency range of the sparker is much higher than the airguns and is c. 300 – 2000 Hz.

Meeting of ship and scientific crews happens at 08.30 every morning.

The Sparker sound source and streamer (recording sound arrivals from the sub-surface – pictures will be in future blog entries) were deployed at c. 1000 hours and we have acquired 5 lines since then of the Sparker “Asterisk” survey (repeating lines done by the Airgun sound source). 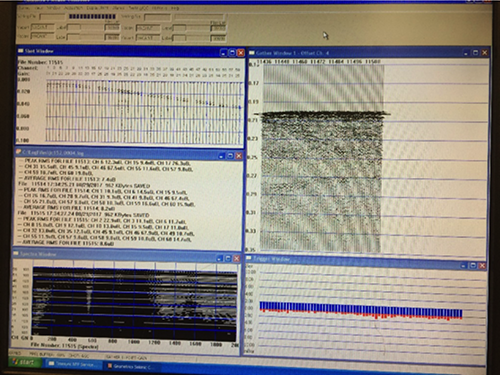