In the morning of 19 October, the BIGO Lander was deployed again and a gravity corer was taken for our colleagues at the NOC before the weather deteriorated. During 20 October, three CTD casts at the lander stations were performed. After this, an acoustic data link was established to verify that the NOC-Lander has started to record oceanographic and chemical data. Subsequently, the second BIGO deployment came to its end and the lander was retrieved successfully despite a significant swell providing a second valuable data set of benthic in situ fluxes. At this lander’s position a gravity corer was taken before RV POSEIDON set sail again for shelter in the Moray Firth. In the morning of 22 October, RV POSEIDON returned to the working area to retrieve the satellite lander and to perform a CTD cast during a large swell of the sea.

Sampling with the BIGO Lander (left) and recovery of the satellite lander (right). Images courtesy P.Linke

Since the weather forecast was favourable for the night and early morning only, we headed for a position further to the east to obtain a CTD cast and a sediment core for our colleagues from WP3. The weather deteriorated rapidly to Bft. 7, but we were able to retrieve a 5.8m long sediment core at the flank of the Scanner Pockmark to sample sediments of the Witchground Formation. These sediments will be used to examine sub-seafloor structures and fluid pathways by sedimentological and geochemical measurements at GEOMAR.

After securing all instrumentation on deck, station work was terminated due to increasing wind speeds and the unfavourable weather forecast. RV POSEIDON set sail for a southerly course around the storm for our return to Kiel Harbour. The transit provided the time to have a first look on the obtained data and write the preliminary cruise report. We will arrive on Friday morning to unload the vessel at the east shore campus of GEOMAR.

Despite the difficult weather conditions that caused a loss of 5 full working days, each scientist managed to get a useful data set to accomplish the project tasks of STEMM-CCS and prepare for the upcoming cruises in 2018 and 2019. This was possible only by the engaged and professional support of Captain Günther and his crew, which we would like to acknowledge at this point.

On behalf of all participants with best wishes,
Peter Linke, chief scientist

During Leg 2 of cruise POS518 three different benthic landers will be deployed to obtain oceanographic and biogeochemical baseline data for a small research-scale CO2 gas release experiment planned for 2019. Sediment cores obtained by gravity and multicorer will be collected for sediment biogeochemical analyses and video-CTD casts will be used to study trace gases, nutrients, and the carbonate chemistry of the water column.

Eight participants of leg 2 boarded on Wednesday afternoon of October 11th already to exchange information and take over for the last two and a half weeks of cruise POS518. The 2 trucks with the scientific equipment were unloaded the next day and the remaining 3 participants arrived to complete the scientific crew and helped to prepare the instrumentation on deck and install the scientific instruments in the ship’s laboratories. After the return of one deck hand from the doctor we left Bremerhaven and set sail through the river Weser mouth on Friday morning at 9:30 UTC. Starting with sun shine the weather changed already after passing the lighthouse “Roter Sand” towards overcloud with stronger winds of up to Bft. 6. Here we met the ice breaker POLARSTERN on its return from the Arctic. We arrived in the working area at the Goldeneye Platform on Sunday morning, 15th October at 11:00 UTC with strong winds (Bft. 7) and up to 4 m high waves. Under these weather conditions no deployment of scientific gear was possible.

As the wind ceased during the night, we were able to perform a CTD and multicorer cast and deployed the NOC-Lander, a satellite lander and a BIGO Lander at Goldeneye in the morning of the 16th October. Whereas the latter landers will be recovered during this cruise, the NOC-Lander is scheduled to be retrieved on a subsequent POSEIDON cruise in August 2018. The lander will release data messengers every 3 months to provide data via satellite during this long deployment period. Acoustic communication with the lander via modem provided the working status of the lander at the seafloor.

Above left: Preparation of the BIGO Lander for deployment. Above right: Deployment of the BIGO-Lander with launcher. Images courtesy P.Linke.

However, after this deployment we had to leave and headed westwards to take shelter in the Moray Firth in Scotland as Hurricane “Ophelia” approached the United Kingdom. In the early morning of the 18th October RV POSEIDON returned to the working area at Goldeneye. A CTD and a multicorer station were conducted before the BIGO Lander was retrieved successfully.

On behalf of all participants with best wishes,
Peter Linke, Chief Scientist

Due to the unfortunate weather conditions in the working area out in the open North Sea, we had to stay in the Moray Firth for 6 days. We efficiently used this time to process the data collected so far, prepare maps for the final station work or text and graphs for the cruise report. Some of the spare time on board was also utilised to catch a few mackerel from the Moray Firth, which were smoked for a very excellent dinner meal on Thursday.

On Friday 6th, we returned to the working area and continued our hydroacoustic survey of abandoned wells in the UK sector, this time focusing on targets farther east of the Goldeneye platform. By Saturday evening it was then time to head south towards our final station at the Figge Maar blowout crater in the German Bight. Here, weather and wave conditions were favourable for a second dive with ROV PHOCA to sample the emitted gas and repeat the hydroacoustic mapping of the gas flares. This morning we stopped our station work after a last video-CTD cast at the Figge Maar and return to Bremerhaven port, where we will swap berths with the participants of Leg 2 on Wednesday, 11 October.
Despite the difficult weather conditions that caused a loss of 6 full working days, each scientist managed to get a useful data set to accomplish the project tasks of STEMM-CCS and prepare for the upcoming cruises in 2018 and 2019.

Example of hydroacoustic data at the Figge Maar in the German Bight showing multiple gas flares (light blue to white colours) in the water column (dark blue background colour) rising from the seabed (red to green colours at the bottom) to the sea surface. Water depths at Figge Maar are 30-45 m.

On behalf of all participants I am sending the best wishes.
Matthias Haeckel, chief scientist

Poseidon cruise 518 aims at collecting necessary oceanographic and biogeochemical baseline data for the STEMM-CCS controlled release experiment in 2019. The expedition will take place in two phases: During Leg 1 we plan to deploy a device for high-precision measurements of O2, CO2 and pH in the bottom water, a stereo-camera system and a multibeam echosounder to determine gas bubble emissions at the seafloor. GEOMAR’s remotely operated vehicle, ROV PHOCA, will be used to place and operate these instruments on the seabed. In addition, ROV push cores and gravity cores will be collected for sediment biogeochemical analyses and video-CTD casts study the water column. The work is complemented by hydroacoustic surveys aiming at detecting gas bubble leakages at abandoned wells in the North Sea.

The scientific party boarded RV Poseidon in Bremerhaven on Monday 25 September to unload their equipment and install it in the ship’s laboratories. Cruise preparations were concluded the next day with a harbour trial of ROV PHOCA and we set sail through the river Weser mouth early Wednesday morning. Having a calm sea we went straight to our first stations for hydroacoustic investigations of possible gas seepage at abandoned wells in the German Bight. At the 54-year old blowout crater Figge Maar, located about 20 nm north of the island Juist, we saw indications for vigorous gas seepage in the hydroacoustic data – so-called flares. This blowout structure is about 17 m deep relative to the surrounding seafloor, and about 500 m across. After mapping the seafloor feature, we continued north to the “Entenschnabel”, the outer part of Germany’s EEZ in the North Sea, and then entered into the UK sector. On our way to the main working area in the vicinity of the Goldeneye platform, where we arrived Saturday morning, we successfully surveyed more abandoned wells for gas emissions. After three video-CTD casts and three gravity cores, the wave conditions had improved sufficiently in the afternoon of September 30th to allow diving with ROV PHOCA and deploy MPI’s O2/CO2 eddy covariance tool. This short dive was followed by more hydroacoustic surveys around Goldeneye and at abandoned wells further to the east. 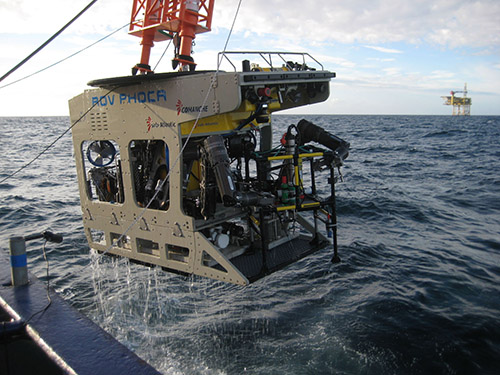 On Sunday, our research work had to be discontinued because of the predicted bad weather conditions with strong winds up to 20 m/s and increasing wave heights. We have now taken shelter in the Moray Firth in Scotland until the multiple storm fronts have passed. Crew and scientific party are all well, and based on the weather forecast we hope to continue our field work on Friday or Saturday to be able to have, at least, a few more stations before returning to Bremerhaven.

On behalf of all participants I am sending the best wishes.
Matthias Haeckel, chief scientist