Background
Focused fluid conduits are common geological structures in sedimentary basins and hydraulically connect deep reservoirs with the shallow subsurface or the seafloor. These structures are interpreted as the result of a overpressure release by hydrofracturing or the fluidisation and injection of sediments, but their nature and in particular their permeability are only poorly understood. The parameterisation of the hydraulic properties of focused fluid conduits is crucial for the industrial scale implementation of CCS as these directly influence the leakage propensity of affected storage formations.

During the MSM78 expedition aboard RV Maria S. Merian, we aimed to conduct a seafloor drilling experiment that was originally scheduled for last year’s MSM63 cruise but could not be completed due to technical problems. The main objective of this cruise was to collect sediment cores from the Scanner Pockmark in the British sector of the North Sea using the British Geological Survey’s Rock Drill 2 system. The experiment aimed to recover sediment cores and to collect downhole logging data from the central fluid conduit of the Scanner Pockmark and from an additional background site unaffected by fluid flow. The sediment cores will be analysed with various geochemical and geophysical logging techniques, which will allow us to constrain the hydraulic properties of a focused fluid conduit and examine its fluid flow history. The Scanner Pockmark is a key target of the STEMM-CCS project and has already been surveyed by various seismic, hydroacoustic and electromagnetic experiments in the framework of the project.

The combination of multi-resolution geophysical data with the direct measurements from the Rock Drill 2 experiment will give us an improved understanding about the hydraulic properties of focused fluid conduits and their impact on long-term integrity of marine CCS sites. Furthermore, we will be able to improve the inversion of the geophysical measurements and to test the robustness of our interpretations. In addition to the drilling experiment, we aim to collect additional bathymetric and echosounder data linking the study sites at Goldeneye and Scanner with existing boreholes and coring sites in the study area.

The team is happy to report the cruise was a big success with all field objectives completed. In all 11 cores were collected, 7 from Scanner Pockmark (totalling 26.4m) and 4 from a nearby reference site (totalling 25.8m). This was done using the BGS rock drill (RD2) and when conditions become too rough a standard gravity corer.

From each core, pore water and sediment samples were extracted for later analyses but were otherwise left unprocessed to allow for later assessment of physical properties in the laboratory. While no analyses was carried out on board the team was excited to note the cores recovered from within scanner pockmark smelt strongly of H2S while a carbonate pavement was observed by cameras on the RD2. Additionally cores from the more active north-eastern side of the pockmark contained pervasive black blebs, most likely pyrite, in the sediment.

On return to Southampton the cores will logged with MSCL, split, properly described and logged with the ITRAX XRF core scanner in the BOSCORF Core Repository. The pore sediment samples will be used to analyse hydrocarbon gases isotopes and concentrations, RNA, DNA, pH, porosity, grain size, redox sensitive metals and PFCs. While the pore water samples will be used to analyse cations & Sr isotopes, anions, H2S, DIC, TA, δ18O, δD, δ13C and nutrients. Geochemical analysis of sediments and their pore waters will be carried out in Southampton. Porosity and permeability will be determined on undisturbed parts of cores by CT-scanning at GEOMAR (Matthias Haeckel) and the University of Southampton (Ben Callow). 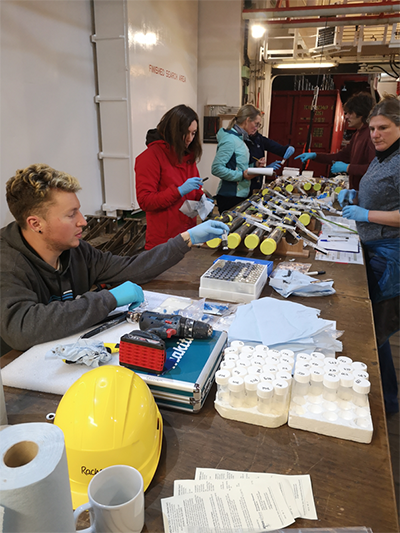 The team hard at work collecting samples from the cores