One of the goals of this expedition is to test some new sensor technology from the National Oceanography Centre (NOC) in Southampton. We’ve brought along thirteen autonomous chemical sensors – the largest deployment we’ve done to date! – and are putting them on a variety of platforms.

The sensors work by taking a chemical analysis usually done in a chemistry lab and performing them autonomously with a device called a “lab on a chip”, which has small channels, pumps, valves, mixers, and optical readouts to measure the result of a chemical reaction.

On this expedition we have sensors for measuring nitrate + nitrite, phosphate, and pH which have been developed and deployed before in the context of other projects. We’ve also brought along some new technology: sensors for measuring total alkalinity (TA) and dissolved inorganic carbon (DIC). This is the first time these two have been deployed outside of the NOC. While on Poseidon we’re trying to prove that they work in a realistic environment both on the ship and in the water and to collect some initial data. To that end, we’re running them in the lab with surface water samples while the ship moves around. We’ve also put the TA sensor on its first deep cast down to about 120 m here and measured along the water column. Later in the cruise we’ll also put both on the lander brought by our colleagues from the Max-Planck-Institute for Marine Microbiology to do a longer-term test on the sea floor. 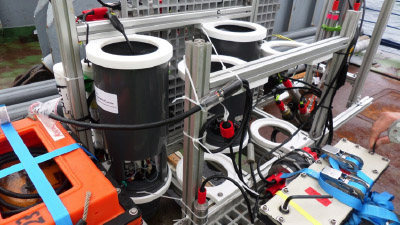 Two of the sensors mounted on the MPI lander 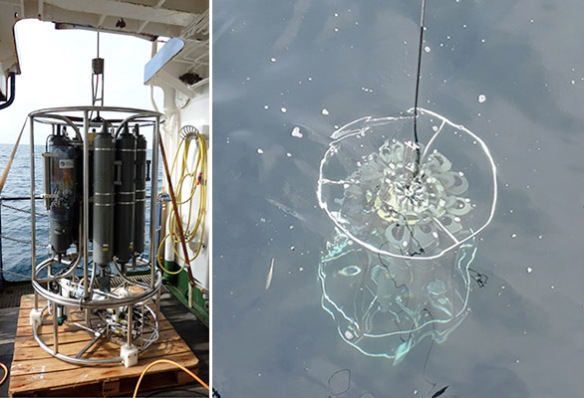 Left: the TA sensor mounted on the CTD device for measuring along the water column (on the left side). Right: the CTD device just under the surface during a deployment

Greetings from all on board!

Allison Schaap and the POS527 team